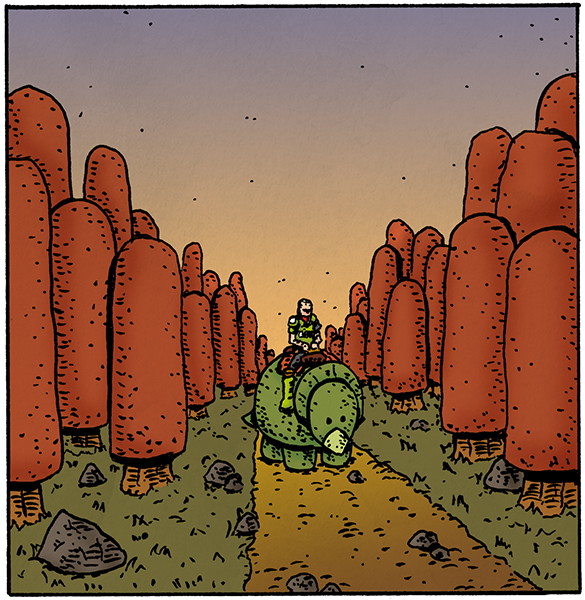 This winter, both my wife and I got that super gnarly flu that everyone got, and I got it the week I needed to make a new comic. While in a somewhat delirious, Advil Cold & Sinus fuelled haze, I was laying around on our upstairs couch desperately trying to think of a story to draw. I resorted to my surefire recipe for story writing inspiration when all else fails (including writing on the toilet, or in the shower) I put away my idea book, laid down on the couch, stared at the ceiling, and put on some Hawkwind. It’s usually Pink Floyd, but I’ve been listening to Hawkwind a lot more lately.

What I realized was that all I really wanted to do was draw a story about a wizard (Hawkwind sings a lot about wizards.) I also realized I didn’t really want to draw proper trees, and since this story was on some kind of alien planet, I could draw the trees any damn well way I chose, which is why they look like popsicles. And so, I came up with that week’s comic: “Tower.”

However, I wasn’t alone on the couch that day; I was hanging out with Pokey. During a Christmas time trip to Costco that year, my wife saw a woman and her young child leaving the store with a giant stuffed dinosaur. My wife had to have one. She regularly reminds me that buying Pokey was “the best $20 I ever spent.” Naturally my couch companion had to be included in the story. So that’s why Life is riding a dinosaur to the wizard’s tower.

This bizarre flu-driven comic got considerably more attention and traffic than normal that week, and most people commented to me that they really liked that dinosaur.

This site uses Akismet to reduce spam. Learn how your comment data is processed.

It’s been a busy week.